J and Beyond, A First Impression 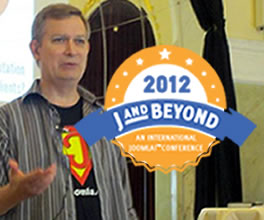 It's a big deal to fly over the pond. A direct flight from Toronto to Frankfurt is seven and a half hours. Not to mention the drive to get to the Toronto airport which can be nasty if you have to travel during rush hour. So I headed towards Bad Nauheim, Germany, to attend J and Beyond wondering what the next couple of days was going to be like.

You are suppose to sleep on a flight that goes through the night so you can hit the ground running when you get there. I got four hours sleep on the flight. Not four consecutive hours, just four hours collectively. Not a great start. Then I messed up other people's plans. Jeremy Wilken pre-arranged to meet me along with others for a ride from the airport straight to the conference hotel. They waited for me to show up as long as they could before heading off. My iPhone had been switched to Airplane Mode so I didn't get his messages telling me where they were. Apparently the coffee on the flight wasn't enough to keep me alert and focussed. Once again, sorry Jeremy, my bad.

You get one chance to make a first impression

So I make my way to Bad Nauheim by train and arrived at the hotel at the same time that Dwight Barnard from South Africa did. Dwight was wearing a Joomla! related t-shirt and so was I. It made it easy to identify each other as Joolmla! community members. We were both staying at a hotel a little distance from the Dolce Hotels & Resorts where J and Beyond was being held. Dwight's smiling face and pleasant disposition helped set the tone for the weekend.

You get one chance to make a first impression and the Pre-Event PARTY at die Scheune that night was it. What a great time I had! It was jam packed with J and Beyond attendees. I met so many people that night that I'd been following through the online social media sites. Everyone was upbeat and I could tell this was going to be a fun weekend.

The sessions started the next morning. The Dolce Hotel was an excellent location for the event. Here are two really cool videos posted about the venue:

J and Beyond Walkthrough with Jack Bremer

Impressions From J and Beyond 2012 from joomlablogger

The sessions were good, the food and snacks were amazing, and the evening socializing was A+. The moral there was very high and full of optimism. Being there you realize that you made the right choice regarding Joomla! as the preferred open source platform. I came away with lots of new contacts, ideas, and a chunk of the optimism that was in the air.

I also got to present a session during the event. The presentation was a lot of fun to do and well received. Here's a slideshare of the presentation:

I have an article "Joomla and Beyond, My First Experience" published over at the Joomla! Community Magazine about the event. There's more stories in it including how I got to be a Judge for the J!OSCAR awards. Why don't you check it out HERE