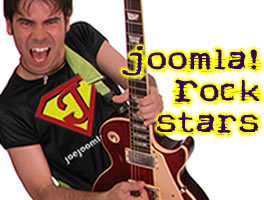 Rock stars are people who have celebrity status, or 'stardom' in their various industries. Joomla! has no shortage of them. Cory Webb, who I regard as a Joomla! rock star, described "How to Become a Joomla! Rockstar in 3 Easy Steps". He stated the steps are simply (1) Build a website with Joomla. (2) Learn from your mistakes (3) Repeats steps 1 & 2. This sounds like basic three chord rock and will certainly get you started toward rock star status in the Joomla! world.

Some Joomla! rock stars enjoy their celebrity and others loath it. For some it's all about the code and not about the people. For others it's about community involvement. Whatever you believe, Joomla! is as fascinating and colourful as any when it comes to it's culture. Behind it all are ordinary people and the rock stars.

So who are these Joomla! rock stars?

So who are these Joomla! rock stars? There are some really obvious ones. Anyone who makes it to the Joomla! Leadership Team (JLT) certainly qualifies. You have to be a hotta in one way or another to be part of that group. The current Joomla! Leadership Team, in alphabetical order, are; Brad Baker, Chris Davenport, Christophe Demko, Mark Dexter, Andrew Eddie, Louis Landry, Matt Lipscomb, Ian MacLennan, Peter Martin, Sam Moffatt, Paul Orwig, Wendy Robinson, Ron Severdia, Jean-Marie Simonet, & Sandra Warren. An impressive and talented group that is. You can read a bit about them on the official Joomla! website HERE

That group above aren't the only Joomla! rock stars

That group above aren't the only Joomla! rock stars. Others have been in that exclusive group in the past and have gone on to continue their Joomla! virtuosity in their continued ventures. One such rock star is Johan Janssens who brings the Nooku framework to Joomla! which helps make things simpler for other developers. You'd also be crazy to write an article about Joomla! rock stars and not mention Andy Miller of Rockettheme. His template club dominates the Joomla! theme community. All those who work with him are also Joomla! rock stars.

Joomla! rock stardom is not reserved for coders only

Joomla! rock stardom is not reserved for coders only. There are literally hundreds, if not thousands, of Joomla! rock stars around the world such as Joomla! bloggers, Joomla! radio show hosts, Joomla! evangelists, and Joomla! cheerleaders. All of these bring their skills and talents to the table which contribute to make Joomla! the best content management website software on the planet.

I could go on forever listing my favourite Joomla! rock stars