I thought it would be fun to turn a famous Beatles tune into a Joomla! song. Both are superstars and Joomla! deserves an anthem. it has to be something worthy of the magnitude of Joomla!, not simply a one hit wonder.

Although I've banged around on the piano a few times in the past you don't want me singing this. Someone with a lot more musical talent than I have needs to do it. I heard the Prime Minister of Canada, Stephen Harper, is a great performer and likes the Beatles. If you can't convince him to do it you'll just have to hum it along to yourself. Now go find your copy of 'Hey Jude'. You do remember where you put it don't you?


There's a chart down below to help you sing along. I can't take credit for the chart idea. A version of it was sent to me with the Beatles song on it. I thought it was very clever. It was what inspired me to redo the tune.

So are you ready? Here we go, Hey Joomla! by JoeJoomla...

Hey Joomla!, don't make it bad
You started with Mambo and made it better
Remember to give it a brand new heart
That's when it will be oh so much better

Hey Joomla! don't be afraid
You were made to be a go getter
So bring all the OS community in
And it will continue to be oh so much better

Any time you need new things, hey Joomla!, refrain
From stuffing your core every which way
For you know there's many of those who code
Who will help to create plenty of good components

Hey Joomla! don't let me down
You'll make lots of fans, the more the better
Remember to let the community in
That's when we will be oh so much better

So bring it on and let them in
Hey Joomla! we win
We're creating open source high performance
And we all know that its so good
Hey Joomla! we do
The movement you need is found all over 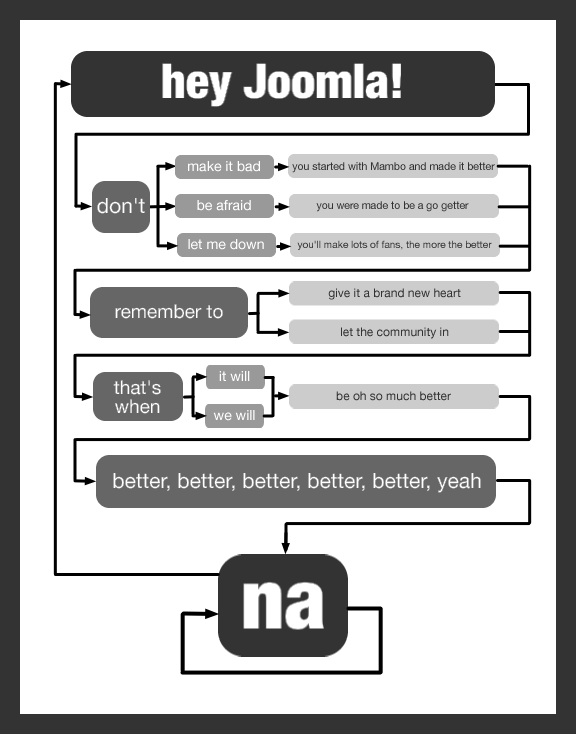