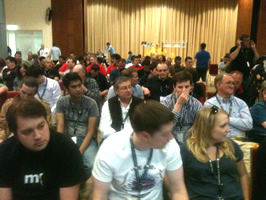 I love Joomla but some of it’s culture needs to change. This is a huge topic so I’m only going to deal with Joomla versioning in this blog post. Before we get started you need to know that the following is my personal opinion only and does not reflect in any way an official view of the Joomla project or Open Source Matters. If you are clear on that then we are good to go…

Sometimes it seems that Joomla is immensely popular in spite of itself. I’ve been involved with Joomla since 2005 and it’s been a roller coaster ride of ups and downs, successes and failures.

Now that 2014 is here it’s time to reflect on the past and determine what needs to change. Some make a habit of criticizing Joomla for everything that they feel is negative but I’m not interested in that. I’m optimistic that there are great people involved with the project who care about Joomla and want to see it rise to it’s full potential. So toward that end I would like to look at the impact of Joomla versioning based on it’s Long Term Support (LTS) and Short Term Support (STS) release cycles.

The Joomla version numbering system for STS and LTS cycles are based on developer thinking and not customer thinking. Here's how it currently works; if you want cutting edge features, you are encouraged to go with the STS releases – for example, 3.0 in September 2012, 3.1 in March 2013, and 3.2 in November 2013. Then when 3.5 comes around it is considered the new stable and LTS version.

The current versioning system is confusing for the customer

When you have to spend a lot of time explaining versioning to end users then you know they don’t get it. Customers equate cutting edge to be a major new release with a new number, not an incremental number. Web designers and integrators that tell their clients to stay on an earlier version of Joomla because it’s better or more stable only hurt the future of Joomla.

Developers know that when a major operating system from someone like Apple Inc. is released that it usually takes a couple of incremental version updates to get everything completely settled down. Customers, however, are sold the major version change on the full version number such as v8, v9, v10 etc., not the incremental number. This is because the marketing is geared to customers.

I think we are better off in the long term making the experience of Joomla for the end users and customers the best it can be. The reason that Joomla is popular is because of the number of websites that use it. There are far more customers and end users for Joomla than there are Joomla developers. Without the end user or customer Joomla would simply be a place where developers do cool stuff. I’ve called this ‘the developers playground’ which some have berated me for because they feel it is an offensive point of view.

Joomla developers should be client conscious

Joomla's success in the early days was dependant upon the 3rd party extensions that made Joomla so desirable and valuable for the end user. Now when a major new release of Joomla happens and the developers aren’t ready with their extensions they hurt the future of the project because the end users will be slow to adopt the new version. So if Joomla is the horse and the 3rd party extensions are the cart, we have been putting the cart before horse. If the cart lost interest the horse had nothing to pull so-to-speak.

It’s not trivial for developers to invest in their extensions for new major releases of Joomla but if they are serious about their future Joomla business they should be ready to go. Imagine Windows or Apple coming out with a new operating system where the major software that runs on these systems wasn’t available for the end users. The new operating system release is considered a failure if a large percentage of the current customer base doesn’t adopt it quickly.

With a culture change Joomla will thrive for the future

I would love to see a major new Joomla version release with a full version number and not an incremental number and the top Joomla! extensions ready to go. It’s very impressive when a software company comes out with a major new release, does a public event launch, and brings out their top software vendors to show how well everything works and how tightly the core product and the software developer community work together. It’s in both parties best interests to hit a home run together. We haven’t been doing that but if we did it would benefit both the Joomla project as well as the developer community because it would create tremendous confidence in the end user base.

Changing culture is not trivial

Change can be difficult for some people but it’s essential for future health. Innovator disrupters jump on opportunities to displace those who have the lions share of a product or service in a market category. Developers give customers the appearance of lack of interest in Joomla when their products and services are slow to be updated to work with the newest versions of Joomla.

So how do we change the culture of Joomla in this regard? I think we need to find the developers who want to form a new kind of culture and simply work with them towards that end. Change the versioning numbers to remove the confusion for the customers and coordinate a celebration of the LTS release cycle with all it’s cool new features along with the 3rd party developers who are ready to go. In other words, have a party and those who want to be there will be identified as the new culture of Joomla.